Zozo the Red Setter was not smart. He lost his sight in a dogfight that he came second in but even so continued to run flat out along the sand flats below our garden, indifferent to the punctuations of anchored boats at low tide. He careered into them so many times that he grew a bony protrusion on his forehead. This helps explain unicorns, who were obviously fast galloping horses with limited sensory skills in very thick forests.

So after darling but daffy Zozo we moved on to more sagacious pooches.

A whip-smart but emotionally high maintenance miniature poodle, who we called Ziggy after an approximately democratic preferential-style vote, was the next canis familiaris to rule our roost. The names that made the ballot paper were largely colour-centric. Like Sooty, Darky, Blackie and Nigger. And Pinky got a vote from our toddler yet to learn his crayon colours.

Then came the Standards. Our four big poodles over nearly three decades have in each case brought solace, joy, loyalty, purpose, humour, tolerance, friendship, a world shortage of tennis balls and caused an inestimable amount of damage to our furniture.

Chris chose Zoe. Her mum was white, but she and all her litter mates were black. In our five generations of Standards bred from Zoe’s stock, and that’s over 40 pups, not one has been white. But they all get pepper and salty as they age, and believe me they are not getting grey hairs caused by stress. Life as a Malcolm poodle is one day after another of ball play, bone chewing, couch potatoing, head massages, ear fondling and don’t mention the spa treatments, pedicures and coiffures every third week.

After they met Zoe our friends Kerry and Bill were a touch besotted and decided that they’d get a boy poodle, with a view to matrimony. When Zoe became betrothed to their handsome Sam the ceremony was presided over by K and B’s six year old daughter Adelaide. The bride wore plumbago blossoms fresh from the Yowie garden, but the groom still took a decided disinterest until his missus went on heat a week later. Both however enjoyed the wedding cake moulded from chilled Pal.

The vet had trouble counting the all little heartbeats. We were told the indeterminate number of pups should come around mid January 1995. On NYE 1994 we held a wee party at Yowie. Friends from Bendigo, Trinette and Rob, were houseguests. We four were readying for bed at 2am when Zoe started turning in circles trying to bite her tail. The whelping box was ready, lined thick with old newspaper. The hot water bottles, scales, ribbons and notebook were lined up for action … next week! Everyone who’d been at the party got a call to come back and watch the action. The first five pups came in the next two hours. Intermission. Or maybe all over? Those pups were already suckling well, Zoe had nibbled through their umbilical cords and eaten their placentas. Text book. Spectators left satisfied after the floor show. Trinette, with her practical midwifery skills, offered to sit up with me, just in case.

Warren and Rob went to bed. Round 2 started soon after. Five more pups in a timely manner. Finito? No, just a pause. By the time the hubbies arose after their wholesome 8 hours slumber there were four more, total 14! Three didn’t make it, but the remaining eleven thrived as we rostered them on and off the milkiest nipples.

Different coloured ribbons identified each pup. Trained by seven weeks to not chew humans by Warren growling at them in a voice deeper and meaner than ever their mother might. Immediately they would stop, and he’d praise and pat them. They’d sit on their fattening haunches and wag their tails. Then start the game again.

The pups grew each night while I wasn’t looking. Feathery bits on their tails. Bigger paws made pedestals for ridiculously round bellies. Trembling legs soon grew into straightened springs and encouraged tendencies to escape from even bigger boxes.

Twice daily the pups, beribboned to discriminate the gluttons from the feed-needy, were test-weighed. Mealtimes became manic as 44 paws to all tried to scramble into the bowls of pellet mush. Containment became challenging. I regularly retrieved escapees from the plumbago hedge. I scolded and nuzzled them, removed the tacky blue flowers from their wavy poodle wool.

Wonderful friends came round wearing plastic aprons to help at bath time, bringing an artillery of hairdryers. Neighbours popped in for cuddles and thoughtfully brought piles of old newspapers that had become the floor covering of choice throughout our house. Zoe eventually became exasperated with no time-out, and once her pups were weaned and devouring mince and gnawing brisket bones, would march round the room, growling like Warren when her progeny tried to hang like trapeze artists from her droopy nipples, just for the heck.

At nine weeks they were as cute as buttons. Separation time. And it was bittersweet for me. I loved them all but was pretty much over being under house arrest and the nonstop cleanups.

Trinette drove up from Bendigo and took a little boy. With five dependent kids and a full time job she had not wanted a pup. But of course she took one, she was the doula at his birth. He was called Clayton, the dog you have when you don’t really want a dog.

Ronda, my dear old school friend, took Jessie. Sadly, at just six months old Jessie was run over. Ronda had eight children and there had not been enough of Jessie to go around, so many little fingers had wanted to ruffle her curly coat. The thought of telling her youngest daughter Lucy that Jessie was dead was unconscionable for Ronda. She had a solution though, Ronda was the quintessential lateral thinker. Through her torrents of tears she phoned every Standard Poodle breeder in Australia until she found one with an available pup. Sight unseen, it was on the next morning’s flight from Adelaide. They named her Jessie again, and she became one of our doggy daughters too, and it was soon forgotten that she was adopted. Soon after, Ronda solved the problem of not enough dog surface area for everyone in the family to pat and got another poodle. Then another. And another. Until seven standard poodles lived in the Opperman household.

Kate took Jet, eventually. She was an anxious young woman from the US, newly married to an Aussie, and missing her family back home. After several trips from Pymble to Yowie Bay to discuss the pros and cons of dog ownership, like what equipment the dog might need to eat from, and would we help her buy it. Would the dog want to sit in the front seat of the car, she’d buy a sheepskin cover if so. Did we think the dog liked her? I remember over another brew of plunger coffee sitting with Chris and Kate while he quietly helped her work through these worrying issues. Once she was settled he took her to the local pet shop where they bought all the non-necessities for a spoilt pet. Rubber chickens to chew, toenail clippers, a tartan lined basket. Kate, confident once fully equipped for all contingencies, took Jet home. We kept in touch, Jet lived to 12 years.

Jean was a psychiatrist from Balmain. She and husband Alan and their two teenage daughters also came several times to discuss the consequences of owning a pet. The girls clutched a puppy each in hope. The parents handled the matter with cold logic. There was to be no hasty decision, could they come back in a week to progress their thinking? In the meantime they would continue discussing the matter at home. Of course they offered to leave a deposit, but I trusted my Blink! reaction. I knew that after running it around the High Court of the Dining Table for several evenings, the young girls would get their first pet.

A few years on, Jean rang. Alan had left her. She and the girls would have to move into a flat and could not take Sheba. Did we know anyone who could adopt her? Jean was bereft and later told me that she had never forgiven herself for letting Sheba down, failing as human being at that level was far worse than a failed marriage, for the dog had unconditionally trusted her.

But that quirky hand of fate had a totally satisfactory solution in mind. On that SAME day I got a distraught phone call from Angela at Currarong. Her adored pup Sheena had died. She was heartbroken and desperate to get another poodle straight away, did I have the number for the Poodle Rescue organisation? So of course, Sheba moved in with Angela and became Sheena.

Only once did an inspection not amount to a commitment. A man with an Eton accent rang, quizzed us at length about pedigree, and seemingly satisfied said he’d come immediately from The Eastern Suburbs. An hour later we noticed a slow moving Bentley inching down our street with a flustered Asian youth jogging in front, looking for street numbers. The couple entered our home indifferently, and were introduced to the only available pup. The older man shook his head and said in his affected voice “oh no, we couldn’t take that one, it’s got little sticky-out white hairs!”. And they left.

No matter. That pup was predestined to go to a widow from Beecroft with a leafy garden and love left over, who would hand feed him steamed breast of chicken and the crusts off her Vegemite toast. 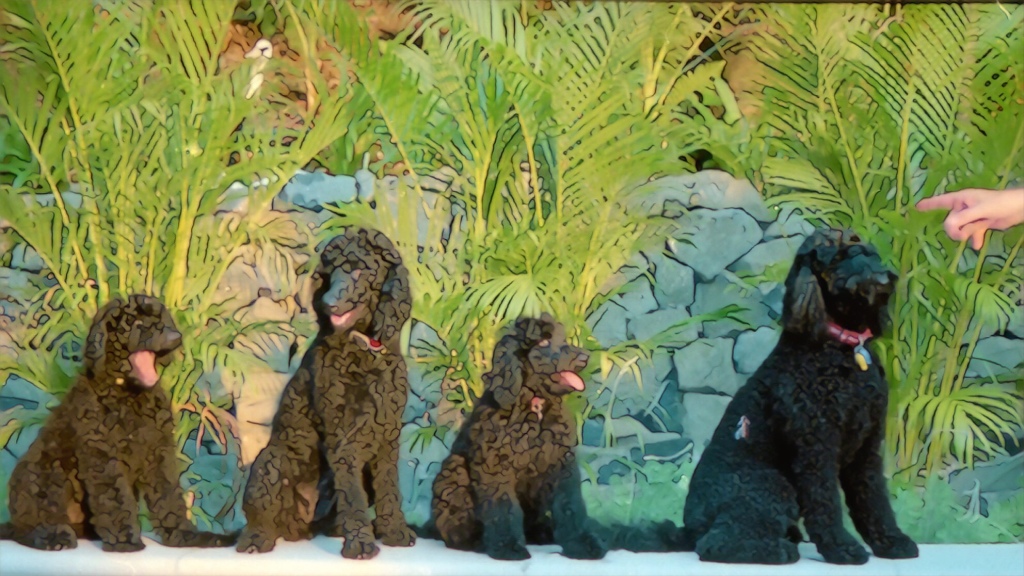 Published by THE CRYPTIC LIMPET

View all posts by THE CRYPTIC LIMPET

One thought on “WHY I DIDN’T BECOME A SATIN BUNNY JUDGE cont.”